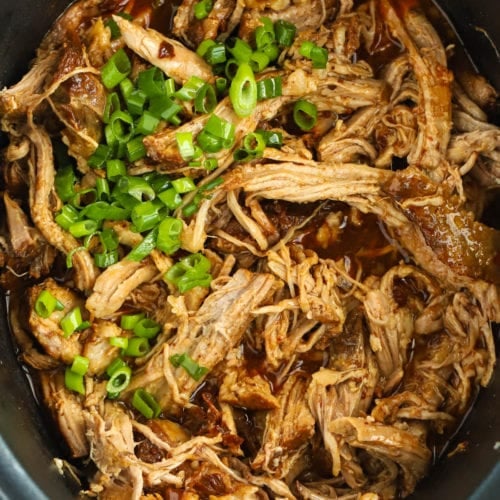 This Slow Cooker Pulled Pork recipe is smothered in honey and chipotle. A ‘dump’ recipe (aka throw it all in!) creates a delicious sticky and smoky sauce.

Looking for a crowd pleasing recipe to serve a big group? A batch cook to give you the base of heaps of meals from the freezer?

Or just a little something special to make for the weekend?

This recipe takes about 30 seconds to prep, and 12 hours later, greets you with a sticky, spicy delicious treat of a meaty dish.

This recipe is also part of a series of 12 Slow Cooker recipes (including NINE brand new ones) that I’m posting over the coming weeks. Watch me cook them on Instagram and TikTok.

Here’s why you should add this to your meal plan:

✅ Just a handful of ingredients.

Which Slow Cooker do you use and recommend?

I use: Morphy Richards Sear & Stew Slow Cooker (it’s light and you can use it for browning on the hob too).

Also! Top tip, buy a WiFi plug for it so you can switch it on or off from your phone when you’re at work? What a time to be alive.. I have these: Tp Link Tapo Smart Plug (Also you can set up with your Google or Alexa to say “Switch on Slow Cooker” WHATTT 🤯

Which cut of meat should I use?

I find that the best cut of meat for this recipe is pork shoulder.

It’s cheaper than pork loin and the fatty stripes through the meat mean it lends itself very well to this kind of cooking.

You could use a pork loin for this recipe but it just doesn’t really have enough fat. I think it’s much better to use a more economical cut like shoulder and then drain the excess fat.

I do cut off the pork skin and any excess visible fat (plus the string!) before popping in the slow cooker.

How do you PULL the PORK?!

When the meat is cooked, drain and keep the juices.

Using a couple of forks, shred up the pork into chunks.

Now you have a couple of choices:

Can I cook this in the oven instead?

You can cook this recipe in the oven but be sure to use a lidded casserole dish.

You’ll need to cook it at 160C for about 3 hours or until the meat is soft and tender. You will need to add additional water to the pot to ensure it doesn’t dry out (a cup or two and keep an eye on it) as cooking in an oven can dry out in a way that a slow cooker doesn’t.

Can I freeze this recipe?

Cooked, leftover pulled pork freezes really well. I portion it up and then just defrost to add to other dishes like stir fries or quesadillas.

Can I prepare this recipe the night before?

Is this recipe spicy?

It does have some warmth from the chipotle. If you’re worried about having any spice for young children, just half the amount or leave it out. It does add a LOT of flavour though.

How long do you cook a pork shoulder for in the slow cooker?

I’ve cooked this slow cooker pulled pork on low for 12 hours, this makes it, juicy and tender and its the perfect set and leave recipe for long days at work.

If you have less time you could cook on HIGH, it will be delicious but it won’t be as meltingly tender as the slower cooked version. It should take around 6 – 7 hours on HIGH.

Ideas for how to serve the Slow Cooker Pulled Pork:

Hope you enjoy this recipe as much as we do. I’d love to know how you got on and what you thought of it if you make this recipe. Please rate the recipe using the ⭐️ by the recipe.

Also, if you’d like to show me a photo by tagging me on Instagram (@tamingtwins) I LOVE to see your creations. 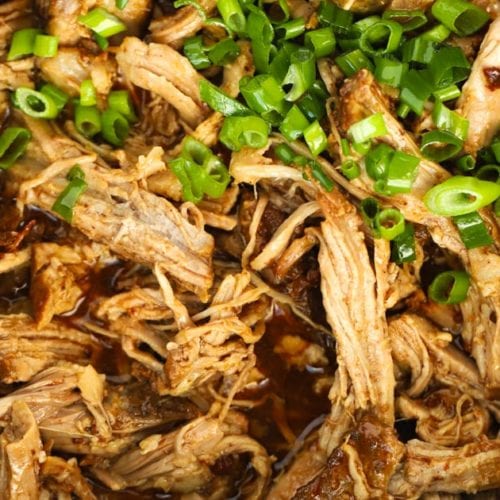 Hi, I'm Sarah! Busy mum, fresh air lover & cake eater. Join me on my journey to provide busy families with easy and delicious recipes perfect for every meal or occasion. Hope you enjoy my recipes!