Yes, I want in!
You are here: Home / Life and Advice / Well That’s Good to Know

As you’ll know if you follow me on Instagram or have had a wander around this blog, I’m the sort of person who thinks about dinner before they’ve even had breakfast. I’m always excited about something foodie, I’m always hatching plans for a recipe or hiding in the kitchen, getting lost in weighing and stirring.

Just over a year ago, I discovered that I could involve my tiny tots in this. Yes it was slower, yes there was an obscene amount of mess but it really was a brilliant activity to keep the both engaged for half an hour. Over the last year, as they’ve got older, I’ve realised how valuable spending some time cooking with kids is. You can involve so many skills; hand eye co-ordination, counting, learning to have patience, the reward for perseverance, science, reading, following instructions. The list goes on. They learn so much from time spent cooking together. Me? I learn not to get too stressed about the mess, I learn that an activity that they can both be involved and enjoy (despite their wildly different personalities) is really precious and I learn that cake at the end of half an hour of chaos can get you through most things.

Cooking with them got me through that difficult learning to say no phase, then it became an excellent rainy day activity, before I lost the plot and attempted to bake banana muffins with 4 children under 4 (video included – watch if you dare). 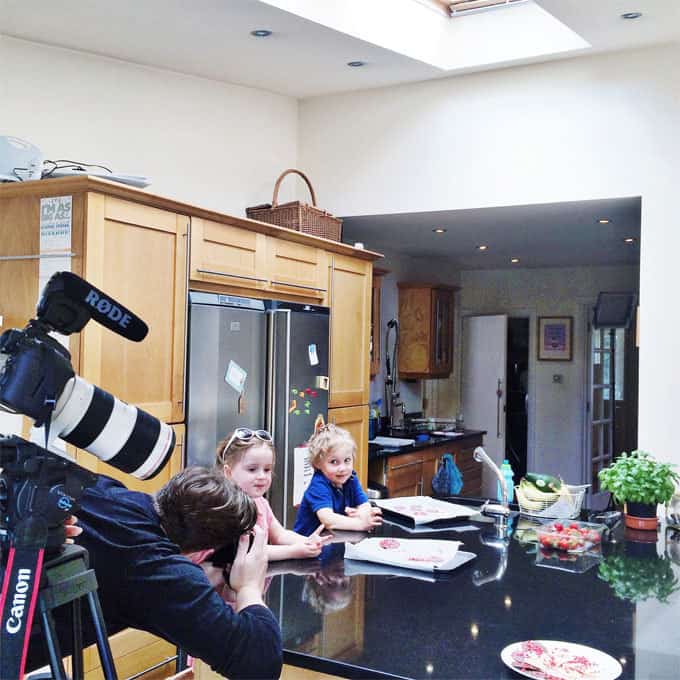 Earlier in the year GoodtoKnow.co.uk were looking for a family to share their kitchen adventures on their site. And, they chose us! So, last month we became the new faces of GoodToKnow.co.uk #KidsKitchen. I thought I’d share some of our videos with you in case you need some kids cooking inspiration.

Also, if you’d like to share photos of you cooking with your children, you could win prizes each month. For details on how to enter, visit the site here: GoodtoKnow Kids Kitchen.

A little introduction from me….

Don’t forget to enter your own photos to win! For details on how to enter, visit the site here: GoodtoKnow Kids Kitchen.

Next month I’ll show you some behind the scenes photos of what it’s like having a film crew in your kitchen with a pair of toddlers…!

Do you cook with your little ones? Any tips or tricks? Which recipes or vlogs would you like to see us make?