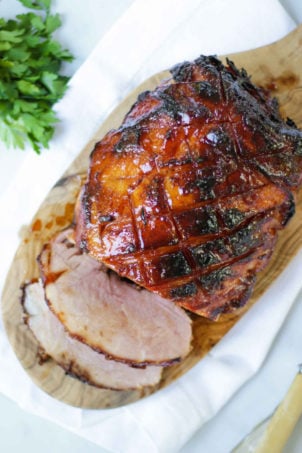 The easiest ever Slow Cooker Ham recipe – A Slow Cooker Gammon joint cooked in apple juice and/or cider with spices for added flavour, smothered in honey, mustard and brown sugar for a delicious outer crunch. 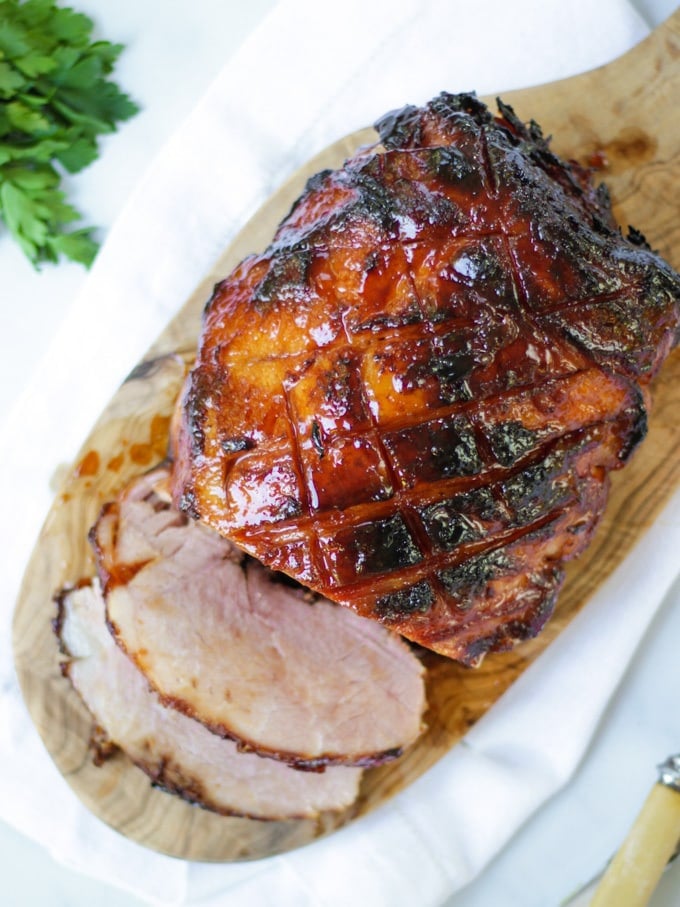 I first published this recipe as my Cider Christmas Ham recipe here in 2014. Oh my goodness, that feels like a lifetime ago now.

The Slow Cooker Gammon recipe is still just as good though. It’s sweet and tangy from being cooked in apple juice and cider. Deliciously tender with that moreish honey and brown sugar outer crust. What’s not to love?!

This year, I just decided to play around with it a little and see it I could simplify it for busy lives. I tried it in the slow cooker (or crock pot if you’re American) and it was a definite winner.

I also feel like it’s too good to save JUST for winter or Christmas. This boneless joint would be perfect for any Sunday lunch.

How long should I cook a ham in the slow cooker?

The beauty of this recipe is it can take as long as you have.

If you have ravenous children or were in a huge rush, you can cook the spiced ham on the hob for around 2 hours (see the tips section for more accurate timings).

If you are popping out Christmas shopping – there I said it (who else has started theirs?) – you can leave it in your slow cooker on HIGH for 4-6 hours, or if you are out at work all day, on LOW for 6-8. It’s so versatile.

What is the best type of ham for slow cooking?

Ham on the bone does retain moisture and keeps its shape well but today I used a boneless joint. It’s easy to handle and easy to carve. It’s personal preference really, just adjust your timings accordingly.

I prefer to use smoked ham rather than unsmoked as it gives a greater depth of flavour. However, just choose the best quality, ideally British ham you can find in your local supermarket. Again, in terms of taste it’s personal preference. Use which bacon you’d buy as a guide! 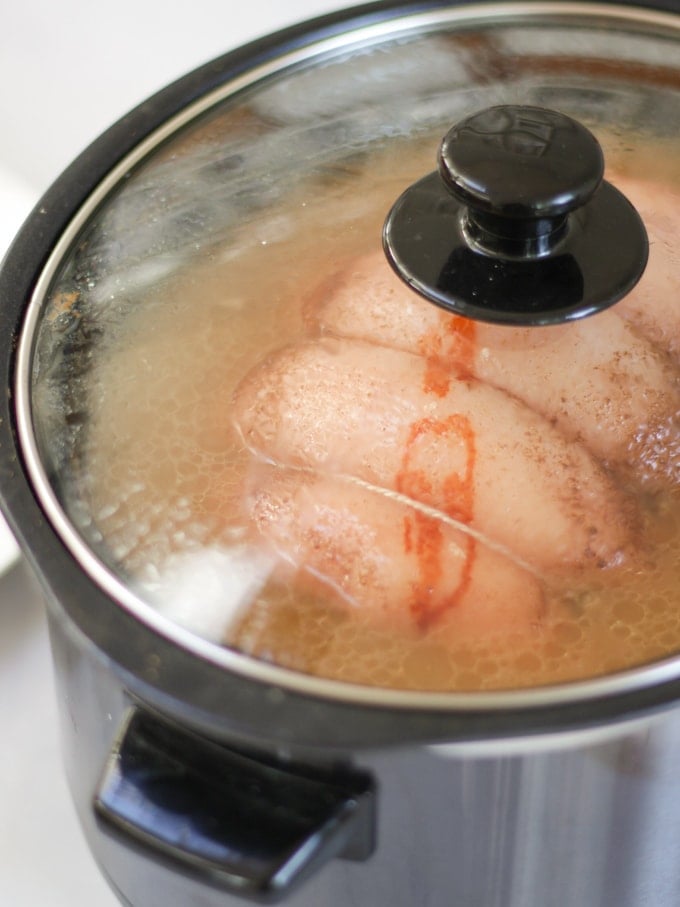 How much liquid do you need for a slow cooker ham?

I like to almost cover my ham with the liquid as this makes the cooked ham really juicy and moist.

You can vary the amount of apple juice depending on the size of your slow cooker. Or all apple juice instead of cider if you prefer to use no alcohol. 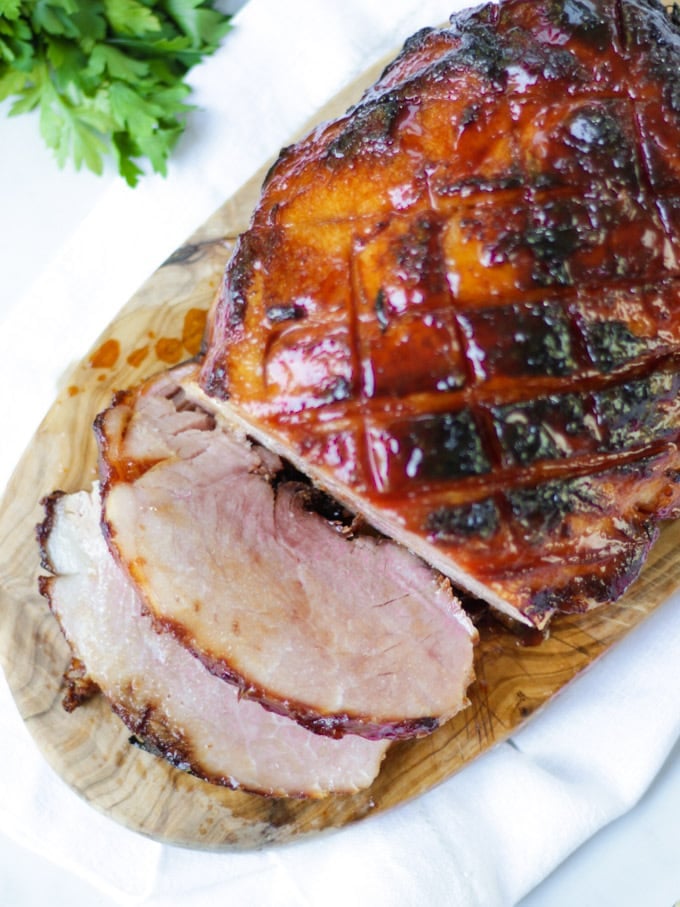 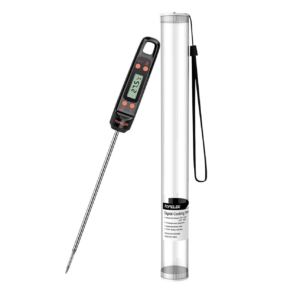 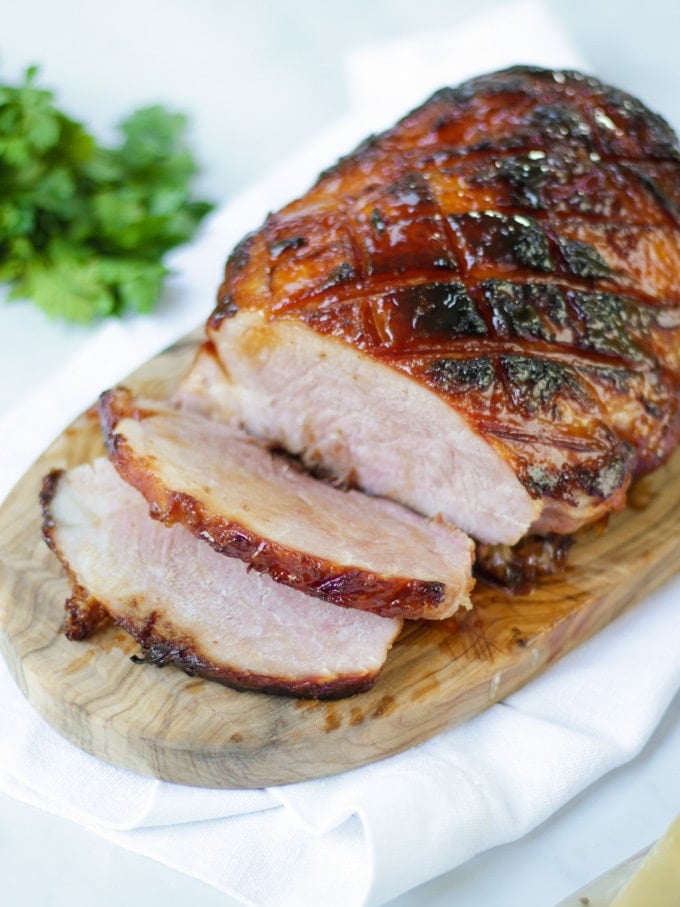 Fancy some other slow cooked recipes?

Hope you enjoy this recipe as much as we do. I’d love to know how you got on and what you thought of it if you make this Slow Cooked Ham recipe. Please rate the recipe and leave me a comment below if you do.

How to make Slow Cooker Ham: 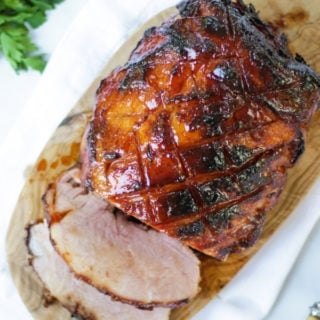 The easiest ever Slow Cooker Ham recipe - A gammon joint cooked in apple juice and/or cider with spices for added flavour, smothered in honey, mustard and brown sugar for a delicious outer crunch.